I was ecstatic yesterday to finally receive my comp copy to the Bernie Wrightson Artwork: A Tribute HC Book by Steve Niles & Shannon Eric Denton at Printed in Blood and Monster Forge Productions. At 244 pages it’s a beast of a love letter with written and rendered tributes from over 200 creators to everyone’s favorite Master of the Macabre and gem of a human being! It was produced via a Kickstarter at Wrightsontribute.com or printedinblood.com and can be bought for $45. I was fortunate that my remembrances and an Inking commission I did in blueline over Bernie’s loose sketch for client Sean Marsh back in 2017 (I was working on an assignment at the time and couldn’t do a new piece) made the cut from the several files I sent on for consideration.

There’s also a lot of unpublished and rarely, if ever, seen Bernie art, especially from the private art collection of Allen Milgrom. I poured through the tome but I haven’t had a chance to read it cover to cover yet due to my current work schedule and obligations but can’t wait to do so. In the meantime I’ll proudly display it on my bookshelf. Buy it! You won’t be sorry! 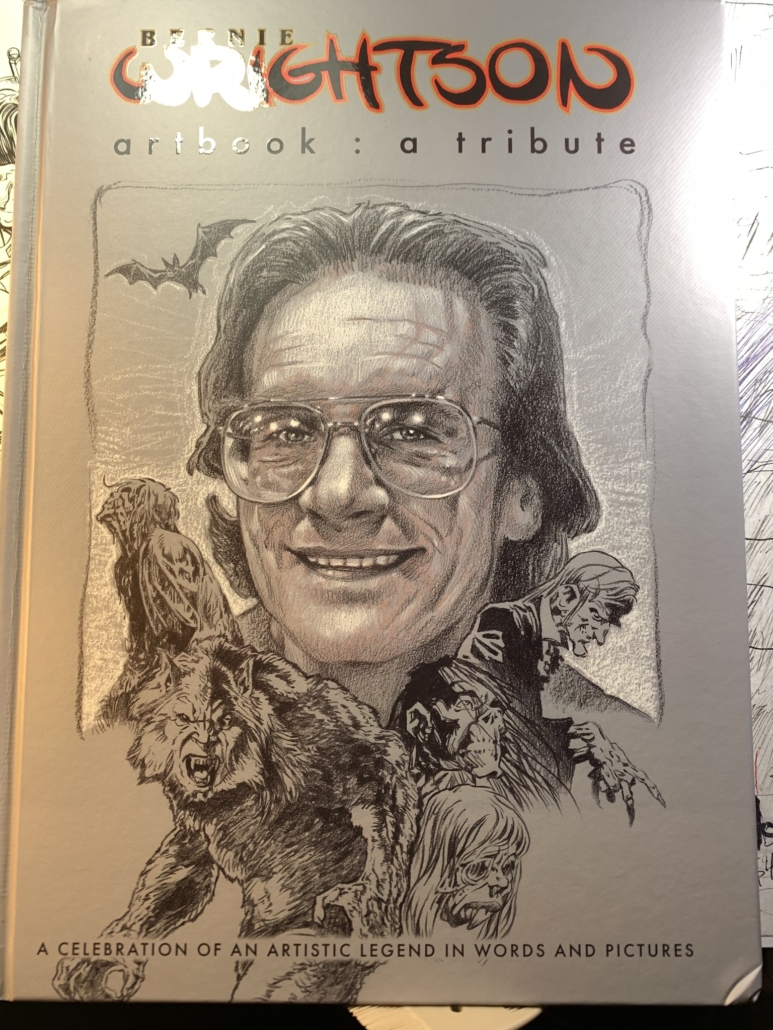 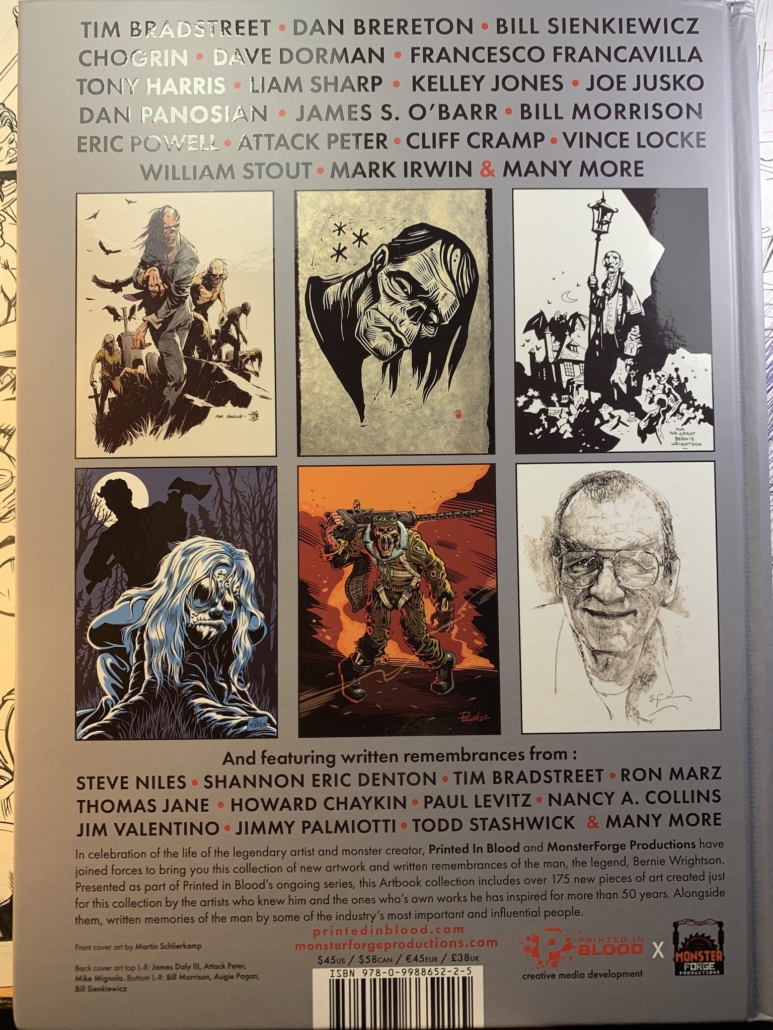 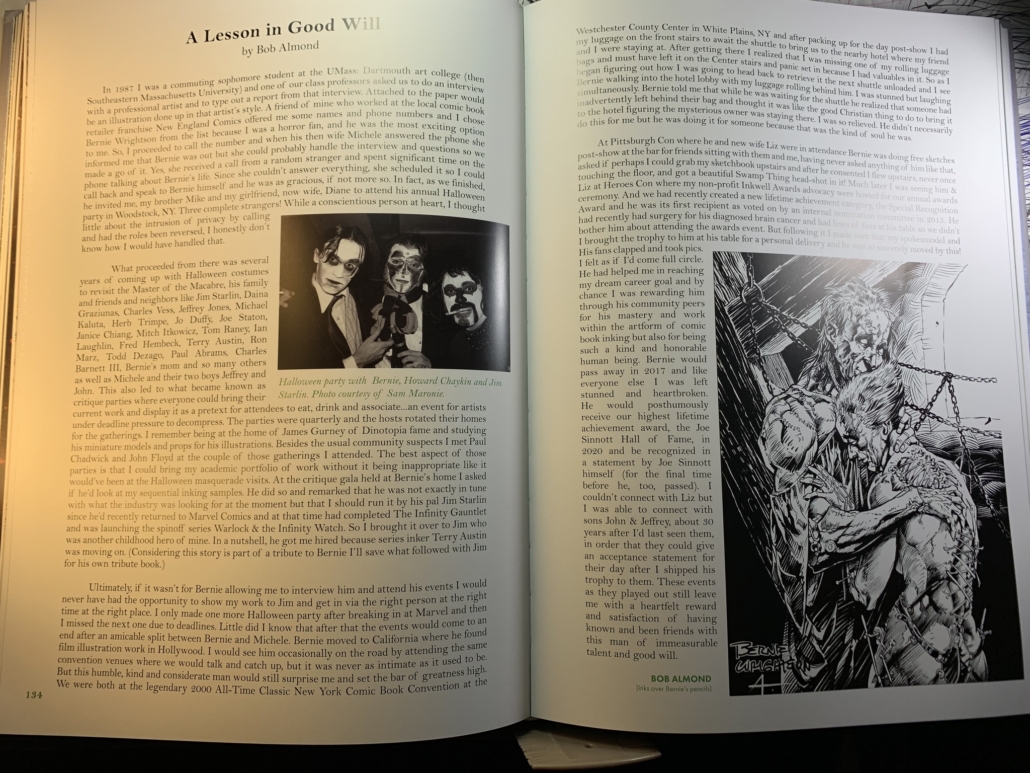 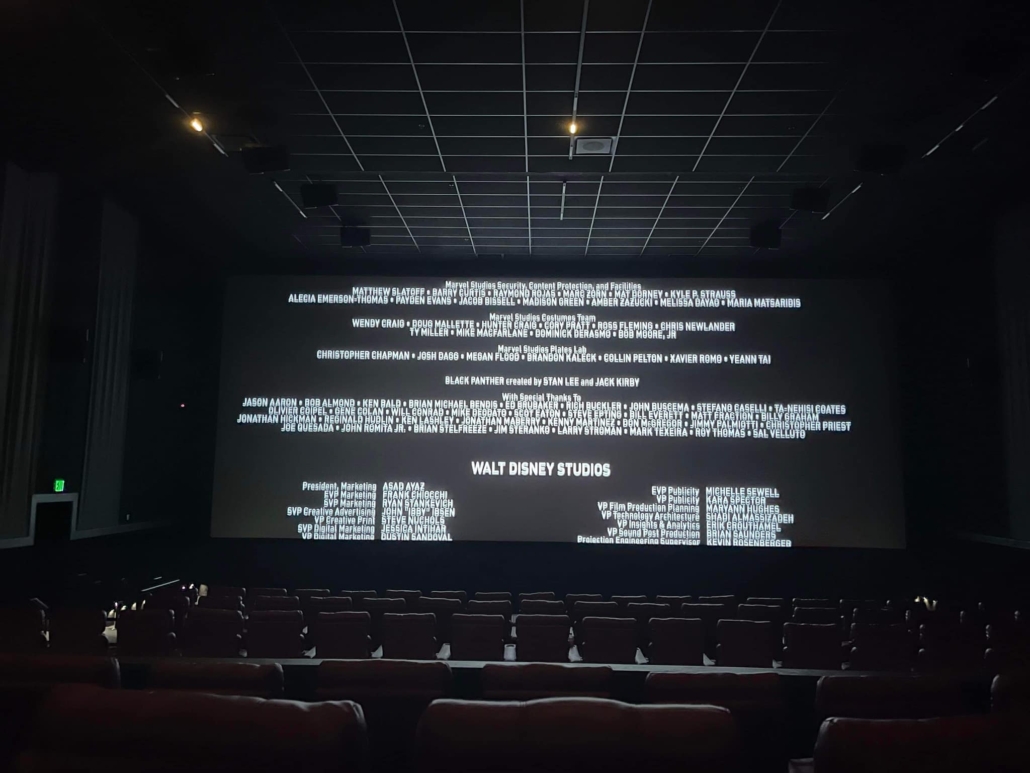 No, I haven’t had a chance to see it yet. Sal Velluto & I didn’t make the BLACK PANTHER: WAKANDA FOREVER LA World Premiere invitation list this time but thanks to the camera  pic of my long-time friend Craig Rousseau at the Thursday late-night showing, we, along with the brilliantly talented friend & partner Christopher Priest, certainly and thankfully made  the Special Thanks end credits. As I posted on my Facebook feed “It’s always rewarding to be recognized for your work with your talented & legendary creative partners Sal Velluto & Christopher Priest after 20 years have passed. And sending a sincere congrats to everyone else involved and credited here for their own contributions towards the mythology of Wakanda!
I hope to slip away to see it with my brother this week.” Always a proud honor.
http://www.almondink.com/wp-content/uploads/2021/02/post-image.jpg 400 400 invasion100 http://www.almondink.com/wp-content/uploads/2020/08/bob-almond-logo.png invasion1002022-11-11 22:45:342022-11-11 23:07:41BLACK PANTHER: WAKANDA FOREVER IS HERE! 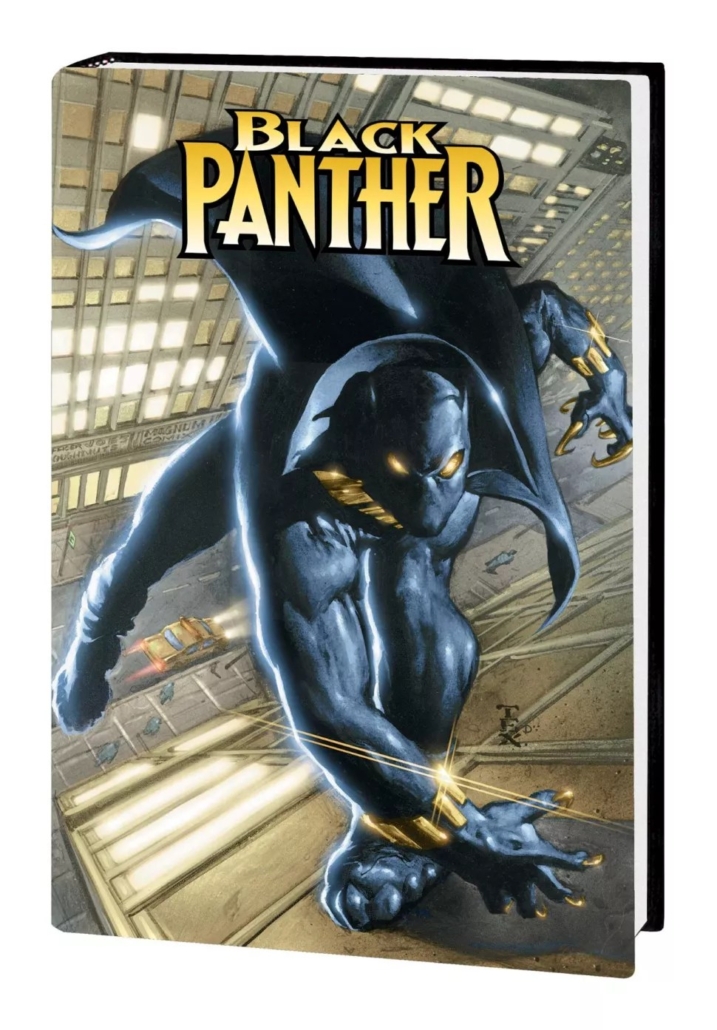 From my Facebook feed: FYI for those awaiting the Black Panther By Christopher Priest Omnibus Vol. 1 like I am, it’s been delayed twice now. It was originally scheduled for release in September and got pushed back to November 9 to release with The film BLACK PANTHER: WAKANDA FOREVER but my local retailer just informed me that it’s now being released November 23 just before Thanksgiving but the film will probably still be out so the excitement should still be there. However, I have noticed online businesses offering them with a December 6 date, too. I will post an update once it’s actually out and I pick mine up. (Main cover: Mark Texeira, DM cover: Sal Velluto/Bob Almond/Tom Smith)
https://www.facebook.com/photo?fbid=10224970558682809&set=a.4656910432371
http://www.almondink.com/wp-content/uploads/2021/02/post-image.jpg 400 400 invasion100 http://www.almondink.com/wp-content/uploads/2020/08/bob-almond-logo.png invasion1002022-11-11 22:43:492022-11-12 00:35:54BLACK PANTHER OMNIBUS DELAYED

As we countdown to the BLACK PANTHER: WAKANDA FOREVER sequel dropping November 11, Sal Velluto posted the following article link on his facebook page yesterday titled “The best Black Panther stories in all of comics (The 10 best Black Panther stories, celebrating T’Challa and the Wakandan Empire in Marvel Comics)” by Robert Reed from October 10, 2022. In a list that doesn’t even count the Lee/Kirby/Sinnott Fantastic Four 2-part intro/origin or any Silver-age or Bronze-age stories (no Don McGregor Jungle Action??) I was proud to see us make 3 out of 10 possible nominations (and almost a fourth that just missed the count as mentioned by the author) after 20+ years since publication. I always knew what my brilliant and esteemed colleague Priest was way ahead of it’s time at the time of production but it’s an honor seeing lists like this that legitimize those personal 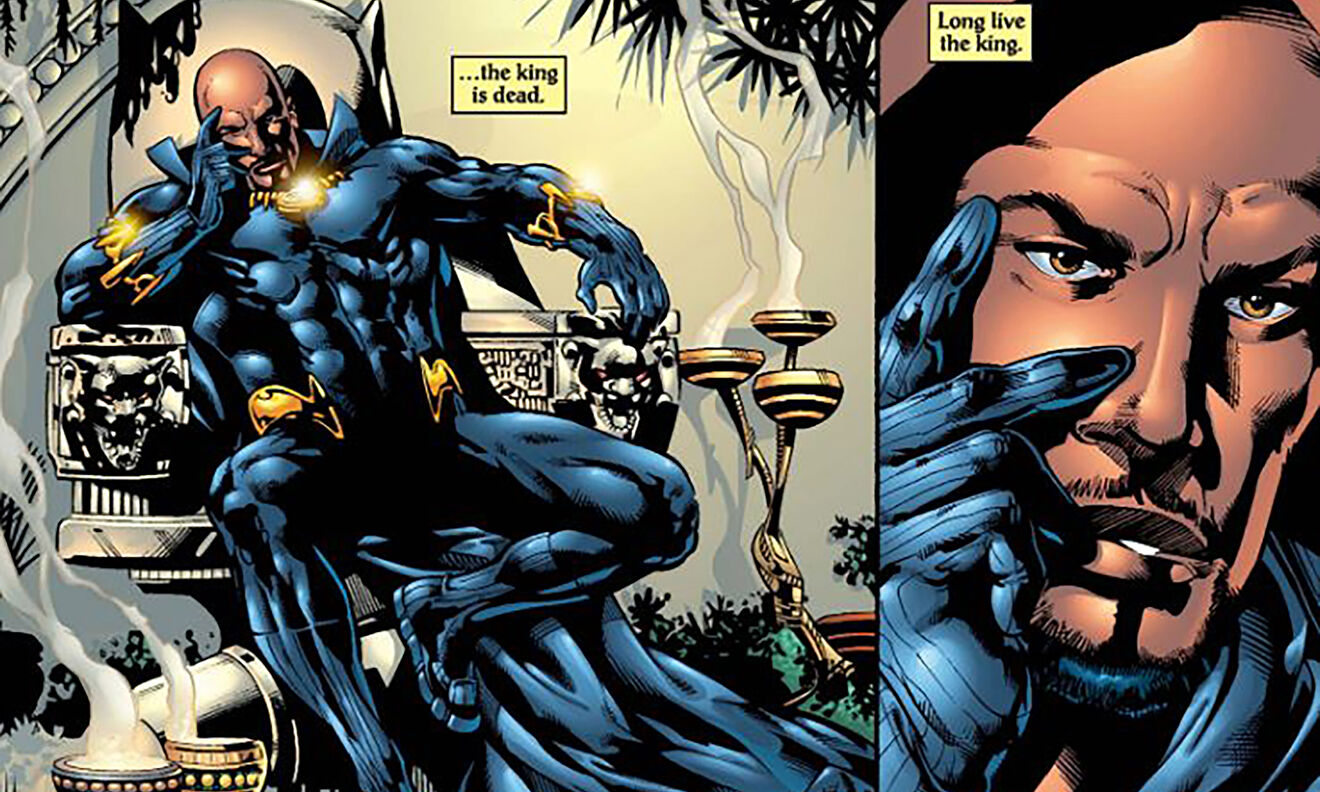 In an 11th hour development Bob and the Inkwell Awards were recently invited to the 4th SYRACUSE NEW YORK COMIC CON on Saturday December 7! It’s a new venue for us and only a one-day show.

But the Inkwells will have senior contributor Mike Prast to help cover the booth and they’ll be introducing the latest, new Ms. Inkwell spokesmodel Becka Sargent. Hope to see you there!

“I knew the book was being released this month (for Black History month, probably) but I didn’t expect to have a comped copy appear in the mail through Diamond Distributions. I’m hoping my pals Sal Velluto, Don McGregor and Priest got one each. I’m guessing maybe it was sent by Marvel Special Projects editor Mark D. Beazley as the office may’ve connected us with author Jess Harrold for an interview. It was a while ago so the memory is certainly hazy. Thank you to any who were involved.

I was at first a bit surprised at the small size of the HC book (6.25″ X 8.25”) since art books usually are BIG so that the art can be truly appreciated, but as I flipped through it I was seriously impressed because there were a LOT of images spanning from the Black Panther’s first appearance in FF by Lee/Kirby/Sinnott all the way to contemporary material from the Intergalactic Empire of Wakanda by Coates/Acuna! (And it’ll fit perfectly on my shortage of shelf space!!)The reproduction is excellent! (I should give props to Rodolfo Muraguchi for the book design.) Every incarnation of T’Challa over the years is broken down into chapters and from interviews we had there are numerous quotes printed in-between and around the images from creators like Stan Lee, Roy Thomas, Don McGregor, Jonathan Maberry, Dwayne McDuffie, Steve Epting, Joe Jusko, Priest (who also writes the intro), Mark Texeira, Reginald Hudlin, Sal Velluto and myself (pages 148-175 is mostly a showcase for our art as the longest-running art team and various statements we make pertaining to the art, collaboration together with Priest and our mindset on the creative process), John Romita Jr., David Liss, Jonathan Hickman, Brian Stelfreeze, Ta-Nehisi Coates, Chris Sprouse, Jason Aaron, Daniel Acuna, Alex Ross, Ryan Coogler and so many more!

The “Newsflash” section at the top of this page now lists my confirmed show apps for the year along with the Inkwell Awards unless specified not. The premiere show of the year

is the Ace Comic Con: Northeast- Boston on March 20-22. We previously attended Ace’s first show in 2017 in Long Island, NY and this is their first time at this venue at the

Boston Convention & Exhibition Center (BCEC) which is the same location that FanExpo Boston Comic Con has been setting up the last 3 years. GSCF and Terrificon are annual

supporters of us so that’s automatic every year with much ongoing thanks to promoters Dave O’Hare & Sal Zurzolo and Mitch Hallock, respectively. I hope to attend The Kubert School

scholarship awards ceremony to reward a student the Inkwell’s Dave Simons Inkwell Memorial Scholarship Fund in Dover, NJ. There is a show confirmed that I’m not at

the liberty to announce yet until they do this winter/spring and atentative one or two towards the end of the year. I’ll post any updates here and on my Facebook page.

Hello! It’s been 7 months since I last posted a news article and it wasn’t from being too busy. My site up and wouldn’t allow me access because my server was out of space.

I approached Steven Freivogel, the Inkwell Awards webhost who updated that site, and asked him for help. I called my server and upgraded to the business level of more

space and Steven was able to return my Commissions Gallery(#2) back here after a long absence. I still need to change the info on the first page (#2) to connect the archived

gallery(#1) link to it and my new ComicArtFans gallery (#3) to it. But this Joomla website is a decade or a dozen years old and at it’s full capacity so Steven will be

working with me over the coming Covid-infected months to build an updated site. I will barely update anything here in the meantime, maybe just a news item or

three. With the pandemic there isn’t a need for months to schedule new conventions until 2021. And my commission list status will remain open for the forseeable

future. But at some point in the future this site will be replaced, hopefully archived but at least with the original archived site presently archived. You will certainly

be kept abreast of all deveopments!

As I’ve mentioned here in the past, for years now my popular commission gallery has not been updated due to website problems going back to my webmaster who created this site after my original site was going to collapse under the weight of the files there. My second Joomla gallery here (@170+ entries) allowed me to expand from the original (@270+entries), now archived, and link to it, preserving the record of my career commissions and unpublished and try-out work. When I could no longer go in to update it it was in a state of limbo and my webmaster and I had a falling out with me so he was no help. I recently had my gallery chronicler Damon Owens help me launch my personal ComicArtFans gallery as a third location to post my past 70+entries I’d been saving on my desktop. (Just too bad it doesn’t allow urls to link visitors to my archived and current galleries.) After six were posted my website server told me that the gallery section was taking up too much space and it had been scanned and I was told that I had to remove it within a week or risk my site shutting down and possibly not be retreivable. Thus I pulled in my two Inkwell Awards webmasters Rhys & Steven to help tech-ignorant me to save the material but first remove it post-haste. This immediate threat was resolved and this site’s gallery doesn’t exist now. Rhys was going to transfer it on WordPress and use Flickr for the gallery but he told me I’d lose all my archived material including the first 270+ of commission entries. So Original webmaster Tim Aslat is studying my Joomla site in hopes of upgrading all the necessary problem areas and have enough space for my gallery section. So in the meantime, I’m not sure if I’ll continue adding entries to the CAF gallery but hopefully in 2020 I’ll get my limbo gallery returned and have updated it with 70+entries. <crosses fingers>

Last year my bud Mike Lilly appeared at That’s Entertainment, a legendary comic book specialty shop in Worcester, MA, to sign on the 6th annual Batman Day. I helped him ink the Batman/Catwoman wedding print (colored by David Ocampo) that was given away to the first 100 attendees. But Mike wasn’t able to get me invited to said event. This year he did. So last week I inked a new print image as seen here, also colored by David (who lives in Mexico so he won’t be at this event). I’d attended this store several times over the years and the place is simply magical, like a time capsule comic book store from the late 1970s-1980s. One time I signed there alongside Mike when we were doing Annihilation: Conquest- Quasar with writer Christos Gage who’s family lives nearby. So if you’re in the area please consider dropping in, all the info is on the promo flyer below. I’ll be the annoying, giddy, balding fankid. HA!