As he posted at his ComicArtFans gallery about this commission: “…this one features the team taking on Wargod, while a leering Set, the Egyptian Deathgod, looks on. Also featured are Menthu, the Falcon, the Black Panther, Triathlon, Storm, and Prism (that’s Monica Rambeau’s new codename from the new Mighty Avengers series). I like Monica’s new costume, because its reminiscent of her original one. Never really got behind her leather-jacket look. And oh, that’s an unconscious Isis, Cleopatra, and Scarlet Scarab on the ground there.”

This entry welcomes a new pencil artist to my gallery in the shape and form of Chris Marrinan. He falls into what I call my ideal penciler in that his work has all of the necessary info I need but leaves just enough wiggle room for me to take liberties and bring something to the table. My only issue with this one was that the pencils did not erase well and I guess he did some erasing and redrawing so that after I originally scanned the image a LOT of the extraneous pencil work shown through making the lines look bumpy and dirty. It took hours to white out and clean up much of those distractions in Photoshop in order to capture my slick ink lines. But otherwise, this was a pleasant experience. 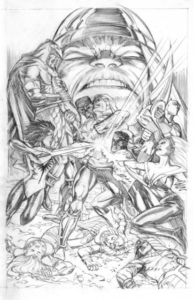 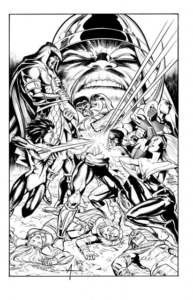 Bob’s inks before the full clean-up 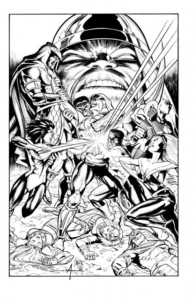