This is my fourth effort inking the legendary Herb Trimpe. The only difference this time is that this is the first time since he passed away last year at the age of 75. (NOTE: in my entry for his recreation of the cover to Incredible Hulk#1 I said that it was my “sophomore effort” but I’d forgotten about the sketchbook Godzilla I did before that so it was my “junior year” Trimpe…but I cannot make edits on my archived sections.)

One thing I learned about inking Trimpe is that you need to know when to stop improvising and capture his style. Herb’s anatomy can be a tad wonky so while I did tweak some areas, I made sure that it looked like a Herb original…otherwise, what’s the point?

This entry marks the debut of new client Ray “Duffy” Wilson and my first commission with Snake Eyes from ‘G.I. Joe’, published first from Marvel Comics and later IDW. At Marvel Herb was the first pencil artist to ever work on G.I. Joe. I printed it on 2-ply Kubert Art board in blueline as instructed and inked about 2/3rds in marker and the rest in brush. Some china marker crayon FX were used as well as black ink and white paint spatters for the explosion. This was completed on 10/8/15. 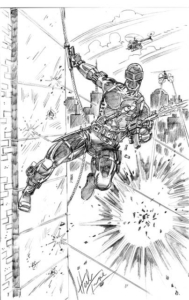 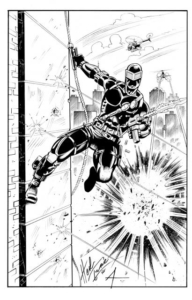 THE BROTHERHOOD: ‘WHOM THE GODS WOULD DESTROY’ BY CHRIS MARRINAN:...
Scroll to top