This drawing by Dave Simons was commissioned in 2008 for a client who, upon completion, told Dave it wasn’t what he’d wanted (Daredevil looks like he beat up the Fixer when that didn’t happen). Dave subsequently sent the rejected art to his pal Daniel Best as a gift. Dave would pass away in 2009.

Flashforward to 2015, my schedule opened up and when Danny heard that I was looking for commissions he sent this image as a hi-res file to print up as a blueline and ink. It depicted the final sequence of Daredevil’s origin in Daredevil#1 by Stan Lee and Bill Everett (w/ assists from Steve Ditko and Sol Brodsky) in his original outfit when he confronts Roscoe Sweeny, ‘the Fixer’, who dies of a heart attack after a chase in the subways. (Sweeney had murdered Matt Murdock’s father, the boxer known as ‘Battlin’ Jack Murdock’, for not throwing a fight as ordered).

On 2-ply Kubert board I inked this image mostly in brush which is probably how Dave would have preferred it. Influenced by the origin retelling by Roger McKenzie, Frank Miller and Klaus Janson in Daredevil#164 I added the heartbeat monitor reading as Frank had. I also used markers, dry brush, finger smudging in white and black and ink spatter in white and black. It was completed on 9/8/15.

Later the original client shared Dave’s 2nd attempt, brought to completion, to more accurately depict the scene. I hadn’t seen it until after I did my version: http://comicartfans.com/gallerypiece.asp?piece=394368 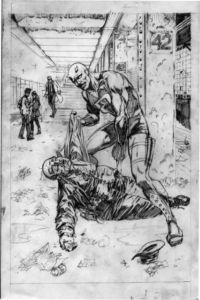 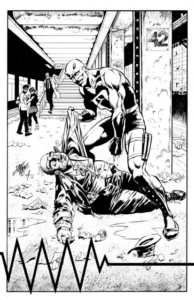 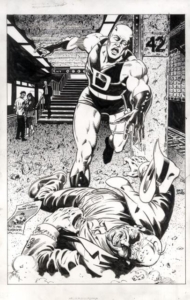 THE BROTHERHOOD: ‘WHOM THE GODS WOULD DESTROY’ BY CHRIS MARRINAN:...