The second of a four commission package from client Michael Rankins, this is his 55th in my gallery. One of my fave characters, this is only my third Carol Danvers/Ms. Marvel commission (last over Matthew Clark in 2007) and only the second in the Dave Cockrum costume design (not to be confused with a couple of others Ms. Marvel’s out there like Sharon Ventura and Kamala Khan). I’ve never inked Iago before but when I saw his work uninked in Michael’s gallery I had to take a crack at this.

I’ve been transitioning my brushes the last few commissions and during Michael’s pieces, retiring an old Raphael Kolinsky 8404 size 3 who’s sable hair head is now much akin to a string for resiliency and snap to a new one size 2 (all sable hair brushes were recently unavailable domestically). It’s always tough to make that change and get brush control over a new brush, not that you can tell, and thankfully this only happens once every few years. I made an effort to capture the delicate lines on this one, using the brush and all of my markers. I think I pulled it off. 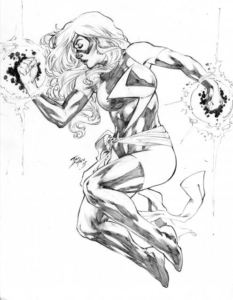