Welcome back our 2nd most-prolific client of the Inkwell, Michael (Swanshadow) Rankins with his 54th commission. This time it’s another ‘Common Elements’-themed job over the pencilling talents of Ron Frenz, only my 2nd time inking him. I do believe that this is my first time with both Spider-girl and the Huntress, though! To better explain the subject matter, who better than to quote the Common Elements maestro himself, Michael:

“Who better to supervise Spider-Girl’s first foray into the world of Common Elements than her co-creator and longtime illustrator, the legendary Ron Frenz?

“Mayday” Parker finds her perfect opposite number in Helena Wayne, the Huntress. Both are the offspring of iconic characters: May, the daughter of Peter (Spider-Man) Parker and Mary Jane Watson-Parker; Helena, the daughter of Bruce (Batman) Wayne and Selina (Catwoman) Kyle. Additionally, both originate in alternate continuities: Spider-Girl, in Marvel’s MC2 universe; Huntress (this version, anyway), in the pre-Crisis Earth-2.”

You probably can’t tell that I was having some brush issues when I worked on this one, but I was. A brush, markers (microns & Pitts) and Hunt 102 was used for inking this image. The 2-ply board wasn’t very accommodating to using a nib and there was some bleeding. It was finished on April 24. 2015. 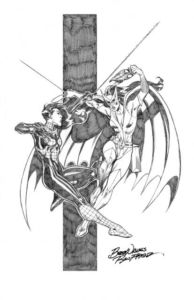 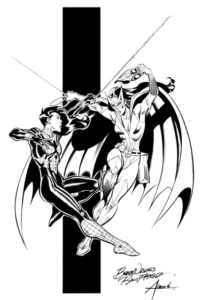 THE PUNISHER BY RENE MICHELETTI: Commission (blueline)
Scroll to top