Client Damon Owen’s 82nd commission to me is the second I’ve inked for his theme ‘Juggernaut’s Tour of the Multiverse’. Last time it was the Harvey Heroes he battled by Val Semeiks (http://almondink.com/gallery/main.php?g2_itemId=2720), this time the Atlas Heroes from the 1970s. I believe this is the 2nd Juggernaut I’ve inked in a commission and definitely the 2nd time I inked Erick Koda’s pencils. The characters are Destructor, Tiger Man, the Cougar, Dragon, the Protector, the Grim Ghost and Demon Hunter. Of these Atlas characters they’re all new to my gallery except for the Grim Ghost who I’ve inked twice before for Damon by Sunny Lee and val Semeiks.

This was done on 11X17 2-ply board and inked with Pitt and micron markers as well as a Raphael Kolinsky 8404 size 3 brush, just a touch of dry brush and some 20% dot zip for the Grim Ghost’s shaded pants. I completed this commission 4/9/15. 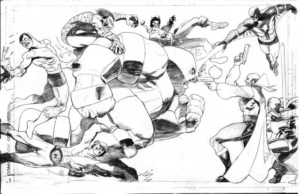 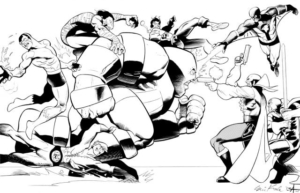