This is slightly out of order as I completed this commission for client Joe Goulart before Damon’s before it. This is my 6th commission for Joe and like the last splash with Namor, it is a blueline recreation of Storm from Black Panther#25, page 22 from the pencil photocopies I still have in my possession of Sal Velluto’s work from our 1999-2002 run together. With this and upcoming recreations from Black Panther you may notice that sometimes the blacks are already filled in in the pencils. This was because during our Panther gig a local friend of Sal’s Lino Viapiano used to fill in blacks on many pages before shipping them to me to ink to help expedite production.

I did’t know how many Storm’s I’ve inked as a commission because some were solo, some might have been with X-men and many were in Damon’s Brotherhood jobs. But I called on my official chronicler Damon Owens and he came up with these stats below after some meticulous research:
SOLO STORM: 4 (counting the amalgamated character Amazon which is Storm and Wonder Woman squooshed together and this Velluto recreation)
STORM WITH BROTHERHOOD: 9
STORM WITH OTHER CHARACTERS: 2 (one with X-men, one with Black Panther)
IN ALL, 15 COMMISSIONS WITH STORM IN THEM. THANKS A BUNDLE, DAMON!

This 11X17 commission was inked on 2-ply Kubert artboard and inked with all of my usual tools (I didn’t use white dot zip over the reflective floor lines because after 15 years since the original art I am almost out of that sheet.) It was completed April 2nd, 2015. 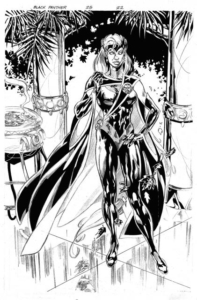 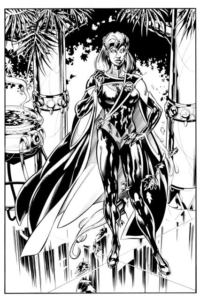 ‘JUGGERNAUT’S TOUR OF THE MULTI-VERSE: THE ATLAS HEROES’ BY...
Scroll to top