Brian Massa throws his name into the massive pool of clients here at the Bob Almond Inkwell Gallery as a first-timer. He commissioned me at the 2016 June Heroes Con, explaining that he’d bought the original cover art for VAMPIRELLA: REVELATIONS: 2 that Mike Lilly and I produced for Harris Comics back in 2006. His blank variant cover was custom made, not just a blank cover without a logo but blank interior contents as well. I explained that I rarely take on pencils & inks jobs due to the time it takes me and that I had assignments at home. He understood and waited 5 months. I used a lightbox and matched up most of the pose and improvised the rest. This was also done because I wasn’t working on an 11X17 image on board now but a reduced image on a cover stock. It’s hard to get the same quality with the difference in size and mediums. He told me he didn’t need the background but I decided to add some texture.

I inked most of this with my Raphael Kolinsky#8404 size 2, There was also some micronmarkers used and the background was one with a Copic extra-wide marker with some white paint dry brush to fade some edges. It was completed on November 30, 2016. 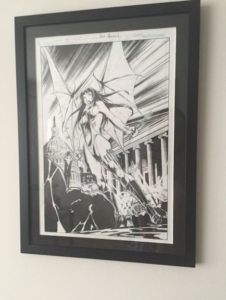 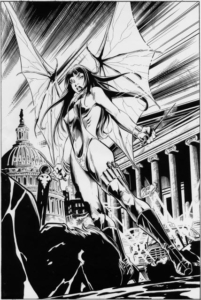 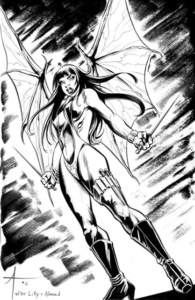 the recreation on a custom blank variant sketch cover

‘ONE MINUTE LATER’: TALES OF SUSPENSE#73 BY BARRY KITSON: COMMISSION...