I love doing Michael’s “One Minute Later”-themed commissions. Even better when the source material is from silver or bronze-age Marvels that I grew up reading and collecting. This is one of those moments.

Michael had run across this sketch by Barry Kitson and an idea bloomed in his noggin for how it would fit into his One Minute Later theme. So after acquiring it, when my commission list officially opened up and I reached out to my regular clients for inking work, he offered me this one. He wanted to have Iron Man added to the image to show that Hank Pym, the Avenger known as Giant Man, would suddenly appear and help out shell-head. To do that Michael sent me an IM image by Arthur Adams that was in the pose he imagined and asked me to add him into the composition in one spot or another. After choosing that and where the title copy would go (originally chosen for over the horses’ wings but later changed) since we had the challenge of the image being horizontal and not vertical like a cover, I needed to adjust the retro armor Arthur had rendered to the design Tony Stark was wearing at this time, the Gene Colan armor that would remain THE SUIT for a decade. I also made minor adjustments to Black Knight and the horse to closer resemble the designs in 1966 but I also kept some of his details since artists do often take liberties with the designs (Nathan Garett never used a broad sword, for example). The Giant Man suit was the last one Hank was wearing when his feature in Tales to Astonish ended a year earlier. Barry rendered that accurately but he made the helmet more blocky than the pointy one he had before.

Since the art was loose, I pulled out my finishing chops to embellish in the details, especially the cityscape backdrop and the cars and civilians on the street. Perspective was straightened out. My tools were mostly the brush and micron & Pitt markers, and some 102 quill, some white and black ink dry brush, and x-acto blade scrapings.

This is my 16th OML and 19th commission for Michael overall. It’s my first time inking Barry. I think it’s my second Giant Man, the first being by MC Wyman in a different uniform. It’s my first evil Black Knight (Nathan Garrett) and the horse, but I never inked any of the other Black Knight versions before like Sir Percy from the medieval ages (and who’s series ran in the golden age of comics) or the one most fans know, Dane Whitman, the heroic Black Knight that was Nathan’s nephew. And it’s my seventh Iron Man (mostly solo, non-Avengers). 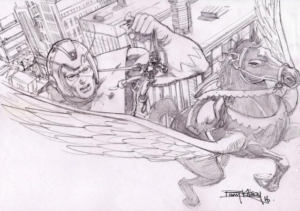 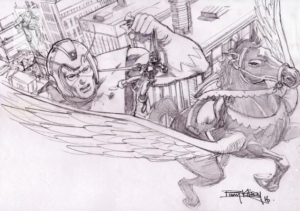 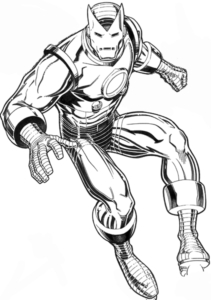 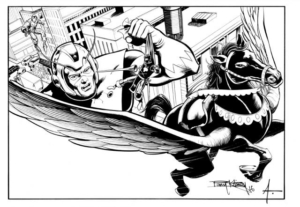 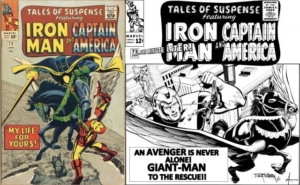 “COMMON ELEMENTS: A THOUSAND POINTS OF LIGHT” BY KEVIN SHARPE: ...