For my 85th commission from most-prolific and exclusive client Damon Owens we took a turn into his Brotherhood Solo Spotlight-themed gallery and wound up with Azrael (the second character by that name at DC Comics). It was pencilled by bronze-age comics vet Arvell Malcolm Jones who I have now inked twice, the last time being for Damon’s 62nd commission (with Luke Cage, Powerman, a character whom Arvell used to work on). I have never inked Azrael before.

This 11X17 image on 2-ply Canson comic book art board was inked mostly with my size 3 Raphael Kolinsky 8404 brush and some markers (Sakura microns, Sigma Graphics, and Pitts). For the sword energy effect I used a small brush used to clean hair inside my electric razor! I dipped it in ink and tapped it on the board with both wet and drying ink. I enhanced that with both black and white ink/paint finger smudges. I used transitional dot zip-a-tone for the night horizon under the star-ridden sky and spattered stars on that with an old toothbrush. I would normally frisket off the character and cityscape and spatter but the ink faded easily from erasing the pencils and from the texture of the board my gut told me that if I used the frisket sheets that ink art might fade or, even worse, the paper surface might lift off. So I used removable tape, paper and post-it notes and make shift friskets and covered over large areas. For tighter areas I simply dotted my stars on with brush. The last detail was using some black china marker ‘crayon’ for the shadows in-between the newspaper pages and under folds. 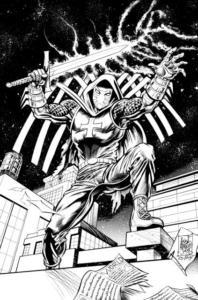