Captain America is oddly not a character that I get to ink for commissions very often. This one is only my sixth Cap (counting Isaiah Bradley) either solo or with other non-team characters (not counting three other commissions with him with either Avengers or Invaders). I don’t believe I’ve inked the Scorpion before.

In this case Michael Finn returns to the Almond Inkwell Gallery for his 12th ‘One Minute later’-themed job, this one for Marvel’s Captain America #122 as originally rendered by Gene Colan and Joe Sinnott. I’d never inked Andres Guinaldo before and didn’t know he was an established mainstream penciller until after I was done. I did some anatomical editing on it and should he see this image I hope he’s not offended. After the fact it also bothers me that Cap’s torso looks too small proportionally to the rest of his body.

This was printed up as a blueline on 2-ply Kubert Art board and inked with all my usual tools. I also added some white spatter over the dust clouds and some crayon-texture for the dark door glass above/behind Cap’s shield. I completed this job on 7/17/15. 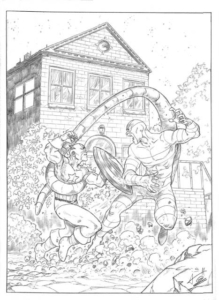 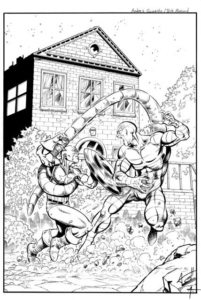 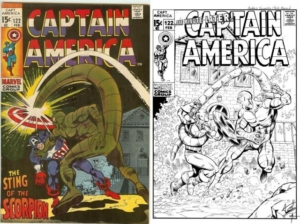