My tenth commission for Christophe Palma is helping me raise my Punisher commission number, bringing this under-represented character here in the Bob Almond Inkwell Gallery to three appearances! And it’s a welcomes back to penciller Darick Robertson who hasn’t appeared here since 2001 on page one of my archived gallery!

This 11X17 job was printed up in blueline on 2-ply Kubert Art board and it didn’t have a background so I added one in. I decided to experiment and test out a hairdryer to have india ink run down behind Frank Castle like blood. Unfortunately, while it gave me a interesting silhouette tree/woods effect, I didn’t find it captured the look of blood and probably should have gone with the simpler approach of placing ink on top of the board after frisketing off the Punisher and raise the board vertically, letting gravity do it’s thing. This would’ve resulted in thinner and more vertical trails of blood. Live and learn. I did also add in some ink spatter, finger smudges and rub-on Instantex in order to add more ink spatter grit and add contrast behind him so that he’d read better visually. For the graphite fade away I used my wide Copic marker. This was inked with brush, micron markers, Pitt markers, Pitt brush mark, and a Pigma Graphic 1 marker. I used a little bit of crayon effect from a grease pencil to show shadow from his jacket over his chest area. Finally, white finger smudges added gun smoke to the image. 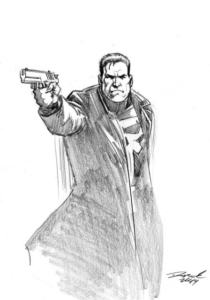 THE PHANTOM BY PAUL RYAN: Commission