For my 84th commission for client Damon Owens he sent me one from his ‘Operation Obscura’-themed gallery (“Home of the forgotten, obscure heroes in comics history”), a dude named Dagar the Desert Hawk. From Damon’s CAF gallery he says this about the guy:
” (He) headlined his own short-lived title back in the late 1940s. He was a desert adventurer-type, probably influenced by Lawrence of Arabia. Interestingly enough, even though he was the star of the comic, the covers always more prominently featured his usually scantily clad love interest Ayesha, while he appeared in the background — and no, she wasn’t a sista. Since the cancelation of his comic, Dagar hasn’t been seen anywhere. Not in Project Superpowers, not in any of the public domain projects that have appeared in the past few years, not even in a Roy Johnson commission. Now you KNOW that’s obscure!”

So it should be no surprise that this is my first Dagar inks, like, ever! And penciller Nick Choles is also new to me, which must make Damon pleased he could deal me a debut two-fer! And I don’t usually get to ink someone influenced by Art Nouveau so this was fun. The 9.5X12.5 2-ply board was more amenable to my lines/tools that the last Damon commission by Banks. I used mostly my now comfortable, new Raphael Kolinsky #8404 size 2 with some marker lines, a lot lot of dry brush, a bit of razor blade scraping, some white ink spatter and some lines made with Bic ‘White Out’ correction pen in the foreground. I completed this job on May 28, 2015. 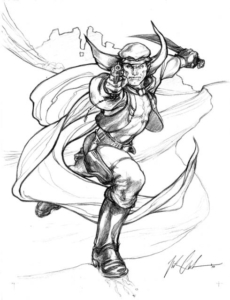 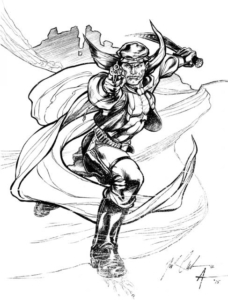