The fourth commission from Heroes Con that I wiped off this summer was for another new client addition to the Almond Inkwell Gallery, Robert Delessandro. It’s my 7th inked Hulk. The client asked me to ink a 9X12 pencil sketch of a Hulk headshot by his debatably most-recognized comic book illustrator Herb Trimpe. I’ve inked Herb five times now, twice since he passed, and usually on the originals (not blueline). But this time I was called to task but an acquaintance, a fellow comic book illustrator and good friend of Herb. Paraphrasing: “How could I have inked Herb’s original pencils instead of scanning them??” It’s funny because until he brought that to my attention, I didn’t think much about the fact that I had inked some of the last remaining pure pencil art of a deceased, legendary artist. I’ve inked the likes of Dick Ayers and Gene Colan and Jack Katz and other masters of the medium, but that was before they’d passed away. How would I have felt if they were offered to me now? I would ask to ink the scanned blueline pencil art from the likes of Jack Kirby, John Buscema, Don Heck, Gil Kane, Joe Kubert, etc. to preserve their rare pencils. So why did I not think about that with Herb? I probably wasn’t being fair and from now on I will try to remember, when offered to ink the original work of a deceased master artist, to ask the client if they would prefer that I scan the art and ink it over blue lines to preserve the pencils. If they refuse and want to pay me to ink the original, I’ll have to dig deep and decide if I should refuse the assignment for the sake of posterity. Regrettably, even if I act from a noble place, the art may simply be inked over by another hired inker;-P

One of the toughest things about inking Herb is that it’s a fine line to straddle between being faithful to his work and making changes to enhance or improve the work. This is also tricky because I’m no master of anatomical editing. I like this resolution but my neck/shoulder region looks a bit wonky to me. I used mostly brush but also markers. The lines ruled in the background were done with both Hunt 102 nib and Pitt brush marker. I intended for some dry brush but the paper surface was also a bit rough so the lines reflect that roughness. Which probably works well with a rough character like Hulk. 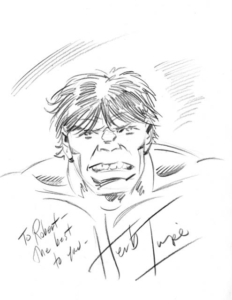 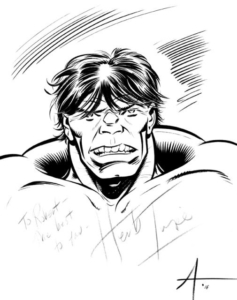