This was the third commission offered to me, a blank variant wraparound Black Panther cover, but I suggested that they go the route of having both BP artists, Sal & Bob, render on it. Alondo McClees, a new client to this gallery, loved the idea! I coordinated the steps and had him ship it to Sal and after Sal drew his image he shipped it to me. Sal drew into it a Jack Kirby version of BP (otherwise known from our 1999-2002 run on the series as ‘Happy Pants Panther’ by writer Christopher Priest), followed by our version, and ending with the Marvel Cinematic Universe one up close.

The last time I inked Sal was for a recreation in 2015. This is my 48th time inking him for a commission but I’m not sure if that number counts the twelve recreations Sal & I have done together or not. (Damon?) Not counting combos or Brotherhood group shots, this is my 28th solo Black Panther job. To ink I used my brush, Pigma Graphic 1 marker, and microns and Pitt markers. From start to finish this took maybe 5-6 weeks. I finished it July 28, 2016.

The Art of Sal Velluto: http://www.velluto.com 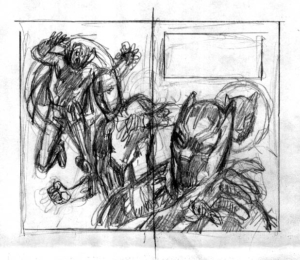 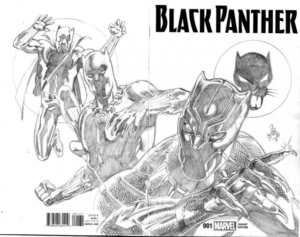 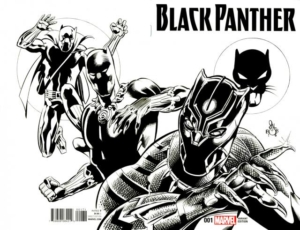