BP#38, pages 19 & 20″: Priest’s script called for Iron Fist to summon his ultimate weapon, his ‘iron fist’, and Sal & I complied. After the art was shipped in to the office they realized that Danny Rand had lost his ‘chi’ in the last Iron Fist limited series which obviously the three of us had not read.

The art was fixed by the legendary ‘bullpen’ at the office and the dialogue was adjusted by Priest but the scene doesn’t make sense in print. To break a steel girder like IF does here with nothing but a punch is not exactly accurate in regards to his normally-depicted strength level. 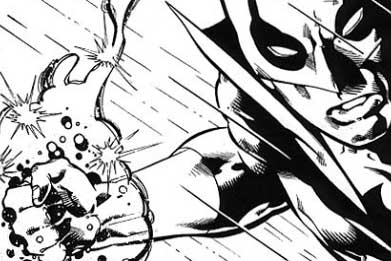