Welcome new client Tim Cornwall to the Inkwell Gallery! And he brings with him my 3rd Quasar job (Phylla-Vell, not Wendell Vaughn), the last two being a remarque for Bob Shaw and a Secret Invasion sketchcover Inkwell Awards donation over Mike Lilly, the pencil artist for THIS piece here and my 6th commission over him. But I have more history with Mike than that as we worked together on 2 pages for an unpublished project called “BOOK”, then 17 pages for an unpublished Captain Gravity story (where Mike was replaced by a Sal Velluto published version), and then the (finally) published VAMPIRELLA: REVELATIONS series for Harris Comics and the ANNIHILATION: CONQUEST- QUASAR series for Marvel…which is what unites us here. At the November 2008 Boston Comic Con Tim commissioned Mike at the show to render the pencils as seen in the first attached file. Then he subsequently emailed me a file that I printed up at home as a blueline on 2-ply 11X17 board to ink and asked me to also add a background to it. I then did up 2 rough marker prelims on photocopies to give Tim options (see files 2 & 3) and he chose option 3. From there I inked the blueline art with brush, marker, Pitt brush marker, drybrush, Hunt 102 quill, white paint spatter for the stars, rub-on Instantex and various zip screens for the wall monitor FX and planetary textures, improvising by adding a lot of elements to the image along the way from both prelims. I completed this on April 9, 2009. 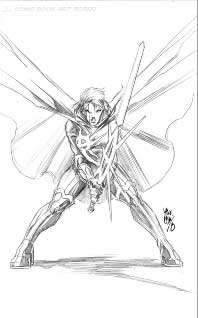 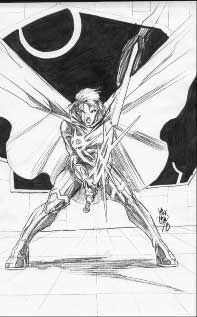 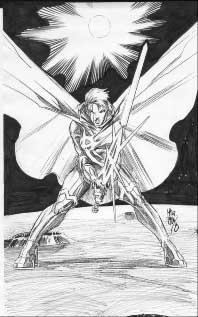 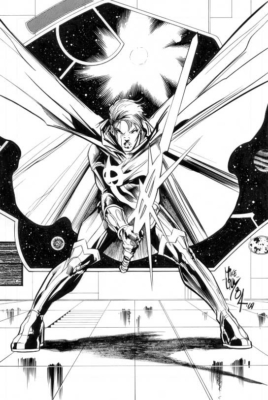