Back for another dip so soon? Here’s part 2 from the last entry. When Mark Beachum shipped that commission to Michael he included an additional sketch of a totally nekkid Ororo. This is actually not out of character for Storm as she has been often shown to be flying nude in her life since she was worshipped as an African weather goddess and this is when she feels most liberated and connected to nature. Although Ms. Munroe is rarely shown in such a stark and titillating fashion. This meant that the client would need my services again. Michael also asked that I cover her up with an outfit that artist Geof Isherwood designed for him in another commission which was itself based on Barry Windsor-Smith’s Adastra, which was herself based on Storm. So I did another loose marker prelim on a photocopy of the pencils to guide me in general and I printed the pencil file in blueline on 11X17 2-ply board. When inking the blueline image I used many of the same main tools and approaches as the last piece: Kolinsky brush, Pitt brush marker, drybrush, graywashes for all the tones, various micron and Pitt markers for the fine details, a blunt-haired, large paint brush for the hair/wind/energy shapes and textures, white paint spatter, and a Milky Gel white pen for the loose, blowing hair strands. I concluded this experiment on March 3, 2009, a day after the last one. I’m not sure which one I like better but overall I’m proud of my finishes on both as I rarely do them. 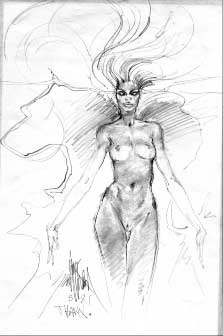 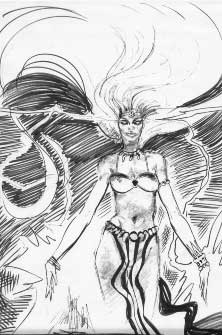 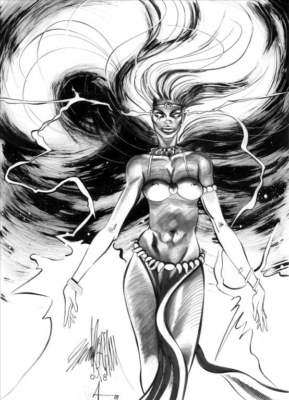