Funny how I got my 1st two Billy Tan commissions within the same month by two different clients! I believe the 1st one was given to me at the April 2009 Boston Comic Con to take home by 1st-time client Dave Katralis on 9X12 2-ply board. This is actually only the 2nd Wolverine I’ve been hired to ink, the first being the Adam Kubert sketch on page ONE of my Inkwell Gallery! (Other Wolverines in my gallery were published somewhere or there’s the pin-up that Kevin West and I did together to sell.) I used brush, markers, Pitt brush marker, and some drybrush and concluded it on 4/18/2009.

The 2nd commission was for the new Inkwell Gallery client Scott Lacy who handed me his 8.5X11? thick sketchbook to take home and finish after I started it at the Boston Comic Con & Toy Spectacular Show in March 2009. The character is a 1st for me, Warpath, son of the first to fall in the “New” Uncanny X-men, Thunderbird. I don’t know Warpath’s status now but I know he started out taking his dad’s identity to battle the X-men whom he blamed for his dad’s death and he later joined the White Queen’s Hellions, counterparts to the New Mutants. He later was a member of Cable’s X-Force and I think he may be part of that new version of the team. This kind of commission is always a challenge because it’s hard to ink when one surface is the inside cover (although I loved the hard surface) and the other one is raised on page 1 of the book (on uneven paper due to the spine stress and usage). But at the same time it’s always an honor to be asked to kick off someone’s book! I used marker, Pitt brush marker and brush and executed the job on March 10, 2009. 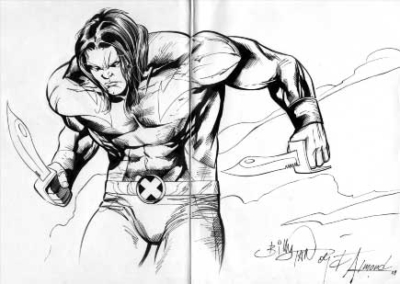