Behold my 1st Storm commission! But only as a solo character. I’ve inked her a few times either as a member of client Damon Owens’ “Brotherhood” team or alongside Black Panther or as the amalgamation entity Amazon. For Michael Rankins’ 40th job to me he sent me my 1st Mark Beachum sketch. Mark is known for his erotic and occasionally hard-core girl art. Michael got Ororo in what I would call a hooker pose and a see-through or wet outfit. Also, the sketch was on paper, not board. So I was called in to scan the image and print it up on 2-ply 11X17 board as a blueline image and to finish the work, making her more sexy than peekaboo centerfold material, and to correct her classic uniform. For finishing jobs I often do a marker prelim on a photocopy. They’re not much to look at but they show my process of planning ahead. Usually by the final inks I’ve made some changes along the way. I inked all the main lines and areas with my Raphael Kolinsky 8404 size 2 brush and my Pitt brush marker. In order to capture the many intricate details and shading in the original drawing I decided to utilize both drybrush and graywash. I also used my micron & Pitt markers for fine details and a Copic wide brush maker for the strokes on the material covering (better) her breasts. For her sweeping coif I used a blunt, short-hair, large paint brush for the dark areas (similar to what I did for my solo Poison Ivy job on page 17 of this gallery…it should have been on page 2 chronologically but a few entries were repositioned in the website transfer process). I frisketed off the hair and made strokes in the background with a China marker for the crayon texture. And I used a white Milky Gel pen for the fine, white, stray hairs. Lastly, I applied the graduated zip screen for her cape. The final image was polished off on 3/2/2009. All the way through I wasn’t always sure exactly how everything was going to play out but, for the most part, it worked. A truly interesting and fun experiment! One that would be repeated somewhat in our next entry, dear gallery viewer…same client, same penciller, same character, same Inkwell- so take a dip won’t you! 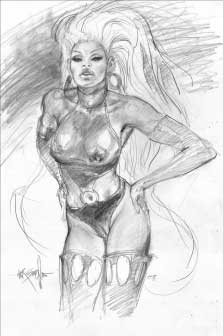 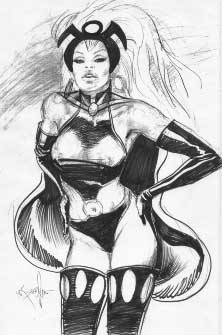 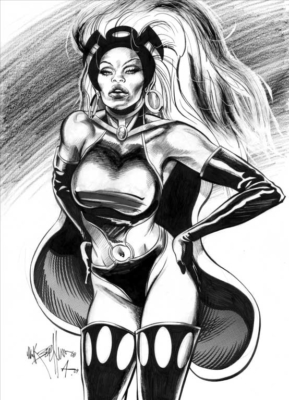