I welcome aboard new client Gregory Covell with my 2nd Spiderwoman (1st version with this character) and 5th Booth job. In this case we have an unpublished cover from the 1999 series and probably originally intended for the first 3 issues as she changed her outfit (a FEW times) starting with the 4th issue. This 11X17 image was inked on Marvel 2-ply board but unlike some recent Marvel boards this one was really good, even taking quill well which probably means that it was a better stock from a decade ago and was stored well. The only negative for no bleeding was that the surface was hard and, thus, made it tough not to leave smudges with my hand as the wet ink sat on the surface a little bit longer before drying. I used about 80% markers (including the Pitt brush one) for this job, 15% brush and 5% with Hunt 1002 quill. As usual, Brett’s work is a workout and this was no exception, but he’s certainly always fun. It was completed on June 28, 2009. 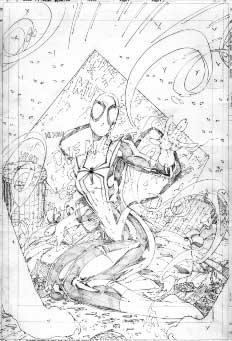 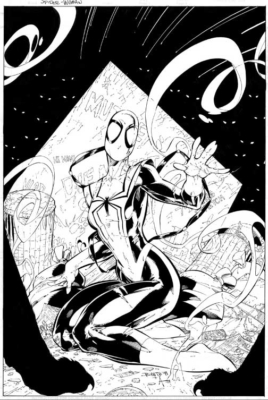