And now for something completely different…
I’ve known Fred now for 22 years or so going back to the Bernie Wrightson annual Halloween parties held in upper-state NY back when I was in college that ultimately led to me finding the connection (Bernie’s pal Jim Starlin) to break into the comics biz. Every year Fred and I, in various costumes & makeup, would hook up and talk comics as, unlike many of the creators in attendance, we were still up in our reading (no longer true of me now that I myself deal with deadlines like those mentioned creators). Those get-togethers ended in the early 1990s not long after I went pro myself so I would only see Fred occasionally following this like at the Ramapo High School Comic Convention and rarely after the Ramapo show came to an end in ’99 except for the once in a while email message. In late February of 2009 Fred suddenly emailed me to inform me that he shipped some pencilled art my way for me to ink (and KEEP!). He figured that after all this time it would be cool for me to lay my India ink down on his graphite, especially as only 8 inkers had ever worked on him before so I would be #9, not counting Fred himself. Fred normally inks himself with a mono-weight line but instead of inking Fred like Fred I figured I should roll the dice and ink him like ME for kicks. I wasn’t familiar with how the other artists approached his work and the pencils weren’t tight so I went in blind and did my thing. It was weird for while I enhanced and polished some areas like I instinctively would, I tried not to lose Fred’s distinctive cartoony style or his energy. Anyway, in the end he (thankfully) loved it and wrote about it in his “Fred Sez” blog which can be seen by clicking the link here and scrolling down to click the “July 2009” in the archives and scrolling down again to the last entry “Almond Joy”, or you can read his statement copy/pasted below. I inked the 11X17 2-ply board with my usual tools of brush & markers. Below, I also included a scan of Fred’s sketch of “himself” and message on the board backside, something he usually does for things like this. I finished it on July 1, 2009.”

Back when the legendary Bernie Wrightson was still living in the nearby Hudson Valley, there’d be a big ol’ Halloween jamboree at his house at the tail-end of each October. All sorts of folks–names both familiar and unfamiliar–would show up, usually fully decked out in costume. One such perennial guest was a young fellow by the name of Bob Almond–usually accompanied by his brother, and always decked out in some elaborate outfit (the walking, talking milk carton comes immediately to mind). I always enjoyed speaking at length with Bob at those annual wing-dings, but they came to an end just before Bob eventually achieved his goal of working in the comics industry.

Well, in the years since, Bob has carved out for himself a distinguished roster of top-notch embellishing credits (which you can read about at his website).

And NOW, he’s put all that good will on the line by combining his indisputable talents with my somewhat more questionable ones!

Nothing too extensive here, simply a collaboration on a pin-up type illo grouping The Fantastic Four, The Black Panther, and Spider-Man. Y’see, while zipping email messages back and forth on other matters, it suddenly occurred to me that Bob might like to take a shot at inking one of my drawings! (His reward? Said drawing to keep–hey, no one ever said dealing with me was a quick way to get rich!!…). He agreed, I sent him the pencilled piece, and today, he sent back a scan of the finished art to me, and now I’m sharing it with YOU!!

Thanks, Bob–you did a TREMENDOUS job!! It’s always a treat for me to see my drawings inked professionally (y’know, as opposed to by ME…)!! You now join a very small, select group of brushmen who’ve taken a shot at my lead scribblings–worthies such as Terry Austin, Bill Anderson, and Joe Albelo (geez–who’s next? Jim Amash? We seem to be going alphabetically here, so Jim–looks like you’re on deck!…) (Doug Hazlewood, Dave Hunt, Joe Staton, Josef Rubenstein, and (choke) Vince Colletta pretty much make up the rest of the list–gosh, I sure wish we coulda skipped the “C”s entirely…).

But Bob? YOU get an “A” plus plus for your exemplary work!! Gracias, sir!!” 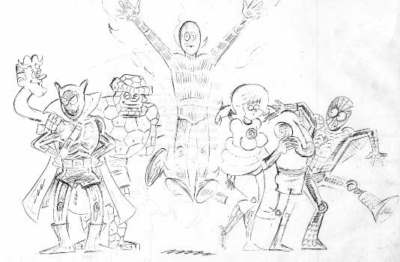 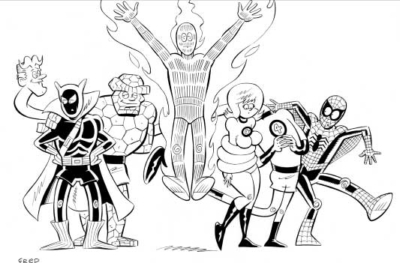 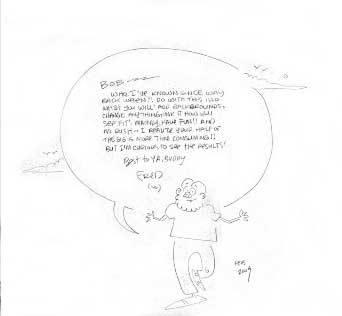