I normally do not do full commissions with both pencil AND ink work because I find that it takes me much too long to execute them. A large part of this problem is that I don’t sketch and I need reference for figure work content. So I find myself only taking on inking commissions over other artists’ pencils since it’s quicker for me. But every once in a while an exceptional circumstance presents itself as in this case. The client requested my services at a convention after showing me his Poison Ivy-themed sketchbook in the summer of 2001.

I took his contact info and agreed to add to his collection when the time allowed me to do a good job. And here it is a year later, while in-between assignments, that I finally started & finished it in August 2002. My pencil sketch was loose in some places since I knew I would tighten it up in the inking stage. It was inked in brush and marker. For the hair I wanted to try a wilder texture so I did some gestural strokes on scrap board to experiment with different tools and I was happiest using a narrow piece cut out of a sponge with b&w ink on the scrubby side.

However, as is sometimes the case, the sketch was better than what I was able to compose on the actual commission art. I used marker & drybrush to tweak the hair and I added some SFX touches like spatter and razor blade scrapings to the art. Lastly, I placed two different, decorative borders, in theme with the subject matter, to frame the work. It has a nice Pre-Raphaelite femme-fatale feel to it, which was my intention all along, having studied & enjoyed that art movement in Art History in art college.

UPDATE- 2/12/2004: I digitally colored the art using color choices that would play up the femme-fatale theme.
<NOTE: The last 3 entries, this one and the next 2 entries were originally placed in proper chronological order on gallery pages 1-2 but were inexplicably repositioned while transferring the contents of the gallery from one format with another.> 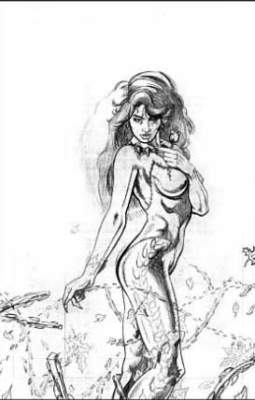 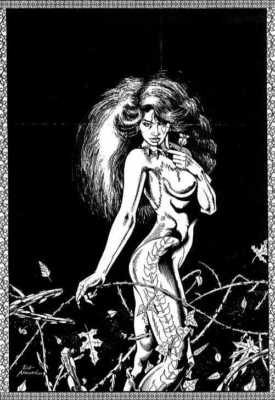 Practicing the hair with sponge & ink on scrap board 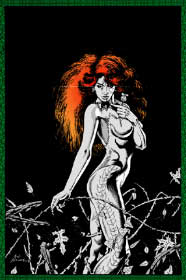