Part of a tidal wave of additional commissions which included the recent two Namor images by Velluto and Geovani, respectively, here we have the 8th addition from my buddy Jeff the the gallery collection. This one depicted Namor attacking Iron Man by the prolific M.C. Wyman, my 5th collaboration with him. The client requested that I remove the scales from Namor’s pants and redraw the legs which I did. My typical, contemporary inking tools were used: brush marker, marker and brush along with some white paint spatter and a tiny bit of zip added to Namor’s belt. The client wanted black added to Wyman’s title logo but not wanting so quickly to repeat the design from the recent Velluto faux cover job we agreed to reverse the placement of blacks to the actual letters this time. The commission was done by 2/2/2004. Considering that M.C. did this pencil commission in 2003 I found it amusing to see that I inked it a year later and Tom Smith was later hired to digitally color the art in August 31 of 2005. 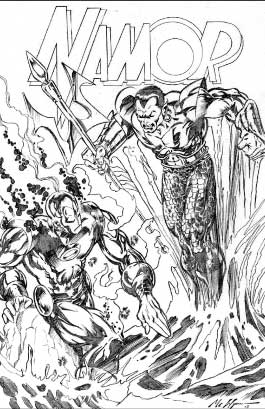 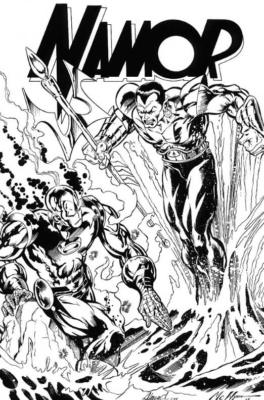