This one was an intimidating challenge. Timothy Finney was the last client to commission Dave before he passed away from his long battle with cancer. His sister Bette found it and sent it to our mutual art rep Bob Shaw who contacted the client. Tim decided to have me finish it which was indeed an honor. However, while there wasn’t much remaining to complete, Dave’s work has more of an edge than I do. Plus, Dave was clearly and understandably struggling towards the end to continue with his work obligations but it showed in his shakier-than-usual lines and smudges. So I tried to understand his intentions and to finish the image with less polish while also cleaning up his rough spots, with our conflicting styles only being evident in Wanda’s hair (hopefully!). My 1st job for Timothy, the content was for one of his literary themed pieces, in this case. Hamlet. It was my 1st time inking Dave and Magneto but I’d inked Wanda in eight previous commissions. The art was on 2-ply 14X17 board. I used brush and Pitt brush marker mostly with limited markers due to the nature of the traditional work. There was some drybrush and fine black ink spatter utilized for me to render the shadow and the ground. The image was completed on 8/7/2009. 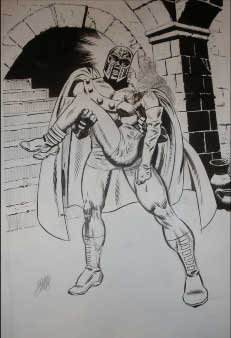 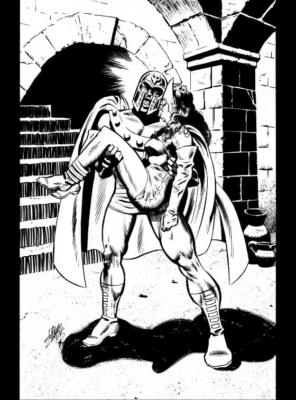