The 10th commission for my pal Jeff, this one was my second time handling HIS ‘Fantastic Four’ assortment from his collection. Namor, Nita, Invisible Woman and She-Hulk is his ideal FF team and while the last one that I inked was pencilled by M.C. Wyman, this one was my first time over Alex Miranda. Due to the nature of the pencils I decided to ink it entirely in my markers without any brush at all so the already meticulous art took a little longer to ink than usual. I finished drawing in Namor’s left leg and spotted black into the background to add contrast so that the busy details would not distract from the overall image itself. As a sidebar observation: I don’t know if it was intentional or not but I found it amusing that all around this mostly (and very busty) female cast were various towering phallic symbols in addition to water draining and splashing everywhere. Maybe it’s just me. This commission was completed 2/8/04. 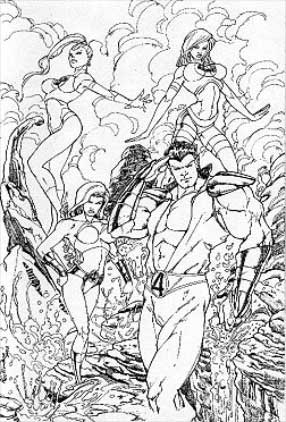 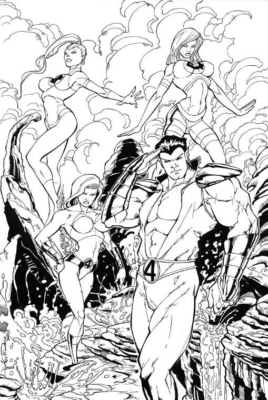