The Deep Six commission is a faux cover idea from my client Jeff’s request. A huge Namor fan, he wanted a team of Marvel underwater heroes so here we have Andromeda, Namorita, Stingray, Namor, Triton and Tamara Rahn. Jeff says “It was a logo I designed and gave to Wyman to use on a cover recreation, almost like Namor’s Team of underwater heroes…” I’d never inked Wyan before so this was a thrill, especially since he was influenced by ‘Big’ John Buscema, and it shows! I used mostly brush for this art with a little bit of marker and I used my Hunt 102 quill for the flash lines around the title…thanks God that this board, unlike some other recent jobs, was receptive to quill use. The only minor alterations that I made was adding in Namor’s ear ring upon request and tweaking Triton’s outfit to more closely match his traditional look. The job was completed on 10/7/03. 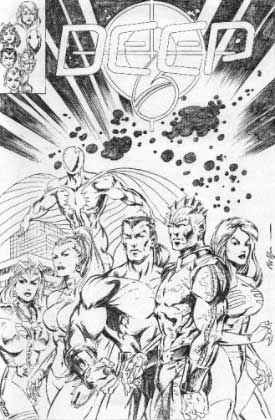 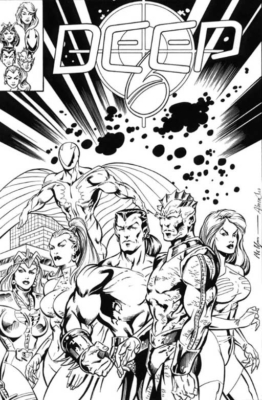