“I added a couple of items to this cool Namor commission. The pencil art was scanned instead of copied so that I could capture all of the tonal aspects of the art as reference which the copy machine was not picking up. I scanned it after I added in Namor’s right shoulder on the large Namor…it originally faded off here with the blacks transitioning into white similar to what was done under his chin and neck and that was bugging me because it faded right_at_the_shoulder. And I did away with the halo between the adjacent shadows on and around his small head. I also added a little bit of the trident. I used brush on most of the work, some marker and a black prismacolor pencil for the grays. I rubbed in some Instantex texture to enhance the shadow edges in the crashing water waves and spattered in some white paint. I also scraped in a little bit of razor lines to elaborate from the reflections from his armor. As many know, I’m usually reluctant to deviate much from what is originally drawn but I’d like to think that this was one of those cases where I brought something extra to the table to enhance the art. This commission, my third for Jeff, was completed 10/5/03. 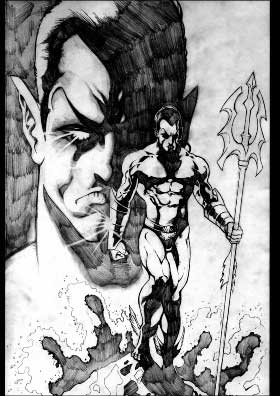 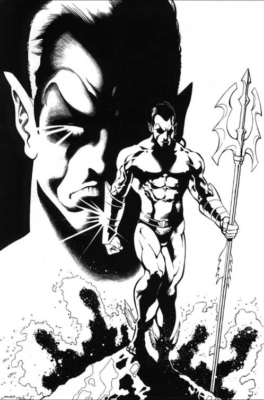 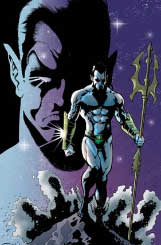