The Marvel Two-in-One Guy does it again with his Thing/MTiO-themed commissions, this time with a brilliant spin of having him take on all of the antagonists from his four Hostess fruit cake ads (including Torgo and the Molecule Man’s building monster) printed in Marvel Comics back in the bronze-age. This is both my 14th commission for the client and my 14th time inking over Val Semeiks. (Only 2 Thing-related commissions w/o the full FF team have been commissioned/added to this gallery from other clients outside of MTiO Guy.)

This is what the client shared on his CAF gallery listing:
“In my never-ending quest to twist and contort my “Thing” team-up / two-in-one art theme in new and different ways, I’ve gone back to those Hostess ads of yesteryear – focusing on the ones that starred the ever-lovin’ idol of millions. I sent the four ads seen at left to artist Val Semeiks, stepped away and let Val do his magic. Val came up with the premise of the Thing defending the contents of an overturned Hostess truck, which is a brilliant way of tying all these pieces together. Needless to say, I am very happy with the final result.”

I inked on an 11X17 2-ply textured board. I normally prefer the smooth version because this kind doesn’t usually take as well with markers so lines are less clean. It was inked with an almost equal combo of markers and brush. I had to do it in piecework because suffered a health problem and had to prepare for an upcoming show. I completed this job on 8/13/15, the day before I had to travel to the con.

NOTE: the caption below is cut off because there is a character limitation. Here is the entire copy for those interested: “Val’s pencils next to the four Hostess ads that inspired them. “Ultimate Weapon” and “Earthly Delights” look like they were penciled by Sal Buscema but I can’t identify the inkers. “A Lesson to be Learned” looks like it’s inked by Frank Giacoia but not sure about penciler (John Romita, Sr.?). And “Sunday Punch” is confirmed as being done by George Perez and Joe Sinnott, which is the art team that work on Fantastic Four#188 that inspired it.” 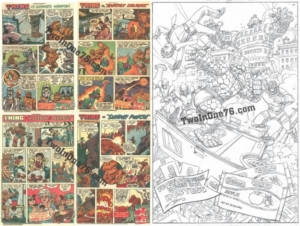 Val’s pencils next to the four Hostess ads that inspired them. “Ultimate Weapon” and “Earthly Delights” look like they were penciled by Sal Buscema but I can’t identify the inkers. “A Lesson to be Learned looks like it’s inked by 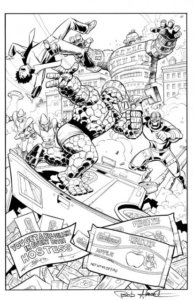