For new client Travis Gates I got something new yet familiar. Besides being my 1st Shanna the She-Devil, wife of Ka-Zar the Savage (geez, you know their kids won’t take crap from anyone!) this is my 1st Ron Lean job…but his style looked awfully similar to me. And it turned out that was because he’s the brother of Ron Adrian who I’ve been commissioned to ink a few times already. Sadly, also familiar, was the 2-ply board that I inked on before and mentioned in the gallery previously, that cream, off-white board which makes it hard to erase pencils later, leaves the correction fluid areas more pronounced, and I believe that it doesn’t take quill well. I inked the 11X17 art with 95% markers and some Pitt brush marker and only 5% with my Raphael Kolinsky 8404 size 2 brush. After finishing the piece on 7/11/2009 I extended the borders of the image in Photoshop on the top and left sides because it bothered me that the spear and the tip of her blowing in the wind loin cloth were touching the edges of the art which is distracting to viewers and those are called tangents. I think it helped it look much better. 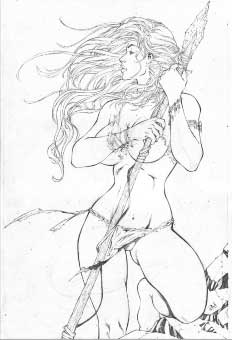 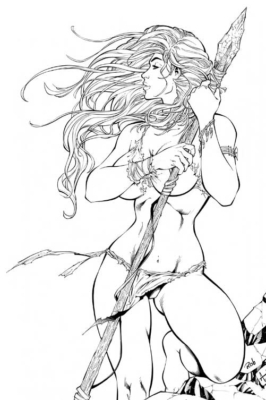