Here’s the second Heroes Con-related commission (see previous entry) that a client hired me to bring home to ink. In this case the client was Mr. One-Minute Later himself, Michael Finn, who had just bought a page from my pal Geof Isherwood, another guest at the show and only some feet away from me. I don’t know what the page was originally intended for but Michael asked me to make an alteration by omitting an inset panel to better serve his OML theme, this one based after the iconic ‘Death in the Family’ Batman story in #428, originally by Starlin/Aparo/DeCarlo with the source cover art being by a young Mike Mignola.

STATS:
*My 15th OML-themed commission for Michael and 18th overall
*My 8th job over Geof
*My 6th Batman commission and 4th with Robin (4 years ago for both characters)

This 11X17 job on 2-ply board took me a long time due to the amounts of detail, textures, my need to frisket off sections, and because when I erased the excess pencil graphite a lot of the ink rubbed off so I had to redo much of the inks. For this reason I couldn’t erase forcibly so some of the dark pencil lines remain, such as where I had to erase and draw over the inset panel art. But this one was a lot of fun and worth the extra time. I used on it my Raphael Kolinsky 8404 #2 brush, Pitt brush marker, lots ‘o other markers, Hunt 102 quill, dry brush, white paint spatter, white paint finger smudging, and x-acto blade scraping over the ink. Geof and I make a good team! 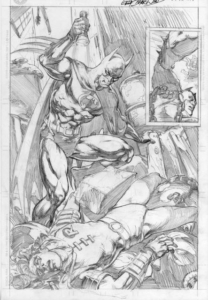 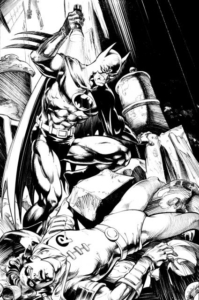 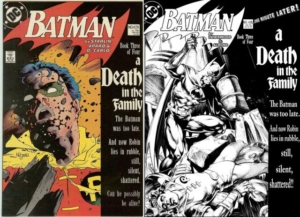