My commission list has been closed. However, when I am offered to do any at a convention I take them on since I haven’t been on any high-profile projects and have almost no original art to sell at shows so it’s the only way to make an income there besides selling prints or the odd comic or trade. A couple of them were for full figure solo jobs so I clearly explain that there could be several month to a year wait for those. But for smaller ones I try to turn them around within 1-3 months. The next four entries show one of my bursts post-show until now.

This Green Lantern by Mike Grell (who’s closely connected to the DC character) bust shot was brought to me by client Arnie Grieves, his only third commission for me (his 2nd and previous one was four years ago next month). I tried doing it at the show but as you can see from the few inks lines, Heroes Con is not the con too try this since it’s so busy and I also have the Inkwell Awards ceremony and other related obligations to keep me occupied. It’s my seventh Green Lantern (in this case Hal Jordan) or my eighth if you count him included in a GL Corps commission. What surprised me was that this is only my second Mike Grell job (going back years for the Crimson Avenger for Damon Owens). I would’ve sworn that I’ve done a couple of more along the way.

It was on 8.5X11 or 9X12 paper or thin board. I used brush, possibly some Hunt 102 quill, and some markers (micronmarkers and Pitt brush). To capture his graphite on finger rubbings I simply dabbed my finger in ink and rubbed ink on the board. It was completed on June 26, 2016. 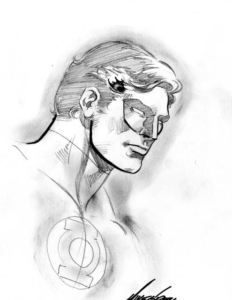 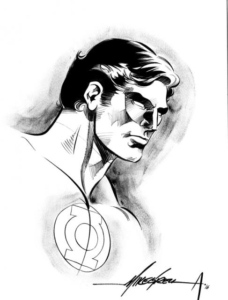