This client commissions artists to render established cartoon characters but in their own style as if they themselves had originally created them. I was honored to be invited to join this gallery of collected art and chose Looney Toons’ Marvin the Martian and his sometime associate Gossamer for a horror, sci-fi theme. I wanted to design Marvin as a deadly, cosmic warlord and elaborate on making Gossamer more monstrous. But it’s tough capturing that ‘threatening’ image when they are both wearing their sneakers. I happened to crop their feet here since I preferred a close-up but, had I not, MTM would’ve had boots and M would’ve had bare feet. I kept what I could from their original designs and added what I needed to fit my interpretation. I went through several prelims, one of which is shown here (file 1), but the one I ultimately settled on came out to light to scan (file 2). As usual with my solo jobs, I pencil loosely and often make major changes along the way while inking. You name it: brush, marker, quill (not accepted well by the board and I had to go back in to clean up my flash lines), razor scrapings, drybrush, spatter, finger smudges, grainy china marker and even dot zip…after I scanned the inks I realized the zip over the background Kirby crackle would cease competition with Gossamer for attention…I used my full assortment of inking tools and SFX on this small 8.5X11 image. (I later did the digital colors seen here (file 4) which displays the zip mentioned.) This ink job was completed on 10/31/03. Happy Halloween!

One of Bob’s prelim sketches 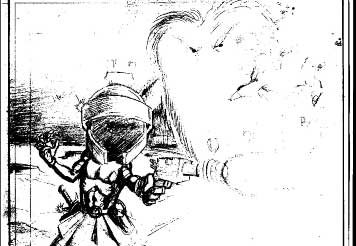 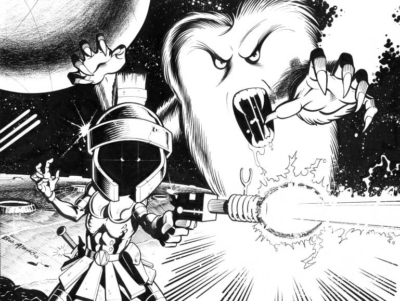