This commission theme is ”JUGGERNAUT’S TOUR OF THE MULTI-VERSE’ and it’s only my third crack at this theme and at Juggs himself but it’s my whopping’ 86th overall for client Damon Owens. This time he goes up against The Protectors. I’ll allow Damon’s gallery description take it from here:

“In the 1990s, Malibu Comics debuted a team comprised of both old, public domain superheroes and totally new creations: The Protectors! The group consisted of Man of War, Gravestone (previously known as the Fantom of the Fair), Aura, the Ferret, Eternal Man, Amazing Man, and Air Man (what a stupid name). They are shown here welcoming Ma Marko’s boy to the Malibu Universe, and he’s shown here graciously accepting their warm welcome.”

Suffice it to say that I have never inked any of the Protectors before as my stint at Malibu Comics didn’t start until 1994-95 with their new Malibu line-up. Luke McDonnell returns to the gallery for my fourth job over him after a seven year absence. My last one was my #52 for Damon on ‘The West Wing’ theme in 2008.

This commission was on 11X14 2-ply board. I used a combo of my markers as well as a Raphael Kolinsky 8404 #2 brush. My only problem on this assignment was the erasing. A lot of heavy pencil lines remained and in order to remove them my eraser caused much of the ink lines to fade. I spent a couple of hours erasing and then replacing the blacks in both wide areas and tight details. Even so, many of the thinnest lines on the original ink art don’t show up on the scanned image. I also made several costume tweaks for the sake of accuracy thanks to the visual ref that Damon sent me. I completed this job on July 27, 2015. 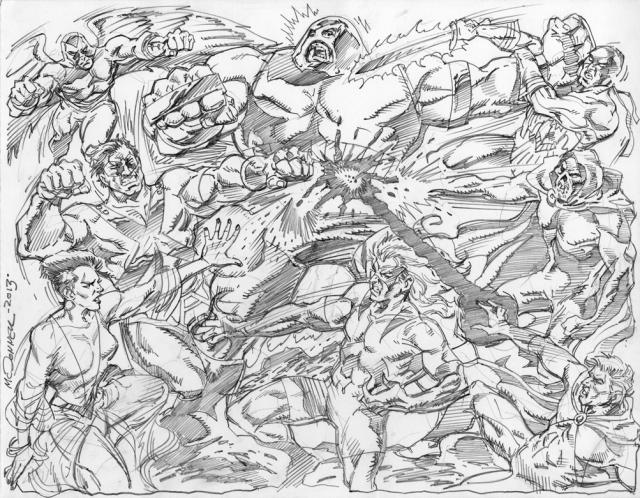 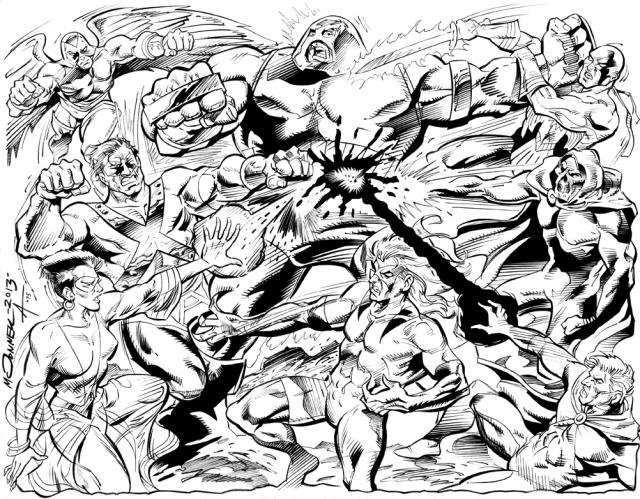 “COMMON ELEMENTS: A THOUSAND POINTS OF LIGHT” BY KEVIN SHARPE: ...
Scroll to top