Welcome back to the gallery client Michael Rankins, who hasn’t appeared here for two and a half years and two pages back. Not really his fault since my list was ‘officially’ closed. But I took on two doozies to celebrate his return! This one is his 12th Common Elements-themed job, and his 58th commission for me overall. It’s the first Orion (of the New Gods) and first Andromeda (or the Legion of Super-heroes) to reach my drawing board. Lastly, it’s my first time inking Kevin Sharpe.

The common element for this one is that both characters are named after constellations.

I used my Raphael Kolinsky 8404 size 2 brush for most of it and a fair share of markers, like for the background. There was a smidgen of Hunt 102 used and for the underside of the boulder (and some of the foreground rubble) I used a Pitt artist pen “big brush”, a Pantone warm gray 7-t, and some x-acto blade scraping. I used zip over Orion’s hands for a shadow effect.

This one was back-breaking with a lot of “morse code” inking effects suggested in the pencils. I could have simplified in areas but didn’t. Had there been a deadline, though, probably…

This one was finished on December 15, 2016. Next would be the 2nd of Michael’s 2 part inker-killer package but I needed a break and he allowed me to work on a simply figure for another client which will be in the next entry. Following that will be Michael’s other job. 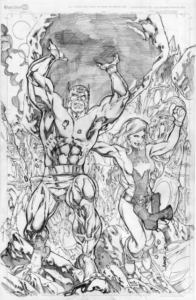 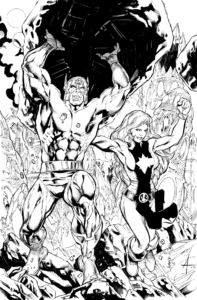 JUGGERNAUT’S TOUR OF THE MULTI-VERSE’: VS. THE PROTECTORS BY LUKE...

‘ONE MINUTE LATER’: TALES OF SUSPENSE#73 BY BARRY KITSON: COMMISSION...
Scroll to top