“Damon’s #56 piece reunites me with Geof Isherwood, my 5th commission work with him and this one’s a doozy that I had my eye on for a while from Damon’s CAF gallery. Both the Falcon & mob boss Morgan appeared in my BLACK PANTHER run so inking them again, rendered so incredibly by Geof, was a nostalgic high for me and the Crimson Avenger was just frosting on the commission cake at that point. Not counting Damon’s “Brotherhood” group shots, this is my 2nd Falcon job (funny, any commission that I’ve done that has Sam Wilson in it came from Damon), my 2nd Crimson Avenger and my 1st Boss Morgan. This is easily the most-detailed piece I’ve ever inked from Geof so it took a long time, especially since I did it in parts while I was doing other stuff. It was on 12X17 unlabeled 2-ply board and the graphite was really heavy on it, rubbing off on my hands. I used brush, Pitt brush marker, markers, China marker in the sky, sponge on Morgan’s hair, zip for shading on Falc’s wrists, and some Hunt 102 quill, all of which the board took well except the quill which is typical of many boards today.I finished this one on March 29, 2009. 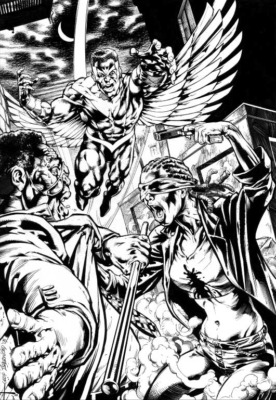