Damon returns with his 58th job for me and his 6th Brotherhood piece. Mike Leeke of Valiant Comics fame is a first-timer here on this 9X12 commission on 2-ply board. I started inking it with my brush this time which is different as I usually do all the black areas first, then markers and THEN brush. This probably meant that I used more brush on it than I would have normally. I also used my Pitt brush marker and other markers and a little bit of my Hunt 102 quill. The rollcall of characters is, starting at the top right and going clockwise: Storm, Icon, Triathlon, Falcon, Monica (Photon, formerly Captain Marvel II) Rambeau, John (Green Lantern) Stewart and Black Panther with Brother Voodoo in the center doing that voodoo that he doos(?) so well. I finished this one on June 14, 2009. 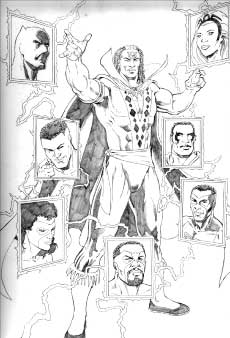 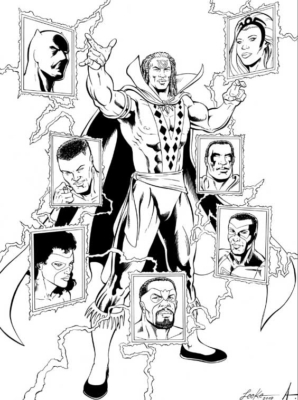