The client requested a faux movie poster for BLACK PANTHER: THE MOVIE. Sal wrote “Since the idea was to do something like a movie poster, I decided to include some of my choices for the cast of characters:
Wesley Snipes = T’Challa/Black Panther
Halle Berry = Monica Lynne
Matthew Perry = Agent Ross
Kevin Spacey = Hunter/White Wolf
The panther costume remains somewhat slick and streamlined, however the claws are a little more high-tech. Since I’ve always conceived the costume to be part of a holographic projection, the panther-like face is to be interpreted in the same vein, a hologram.
As many know, Snipes’ name has been tied to a possible, upcoming film so that actor was a natural for T’Challa. As for Perry and Spacey, BP scribe Christopher Priest had envisioned these actors when he created Ross and Hunter, the White Wolf. [Actually, he explained it as him looking like Michael J. Fox but acting like Chandler Bing.] Berry was Sal’s idea for the poster, I believe. Inked in brush and marker with a dash of white-paint spatter, the inks were completed on 7/19/03. Tom Smith was then commissioned to airbrush the art on a photocopy of the original. 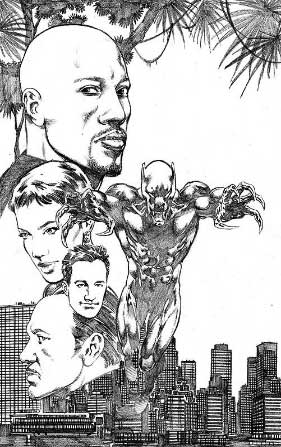 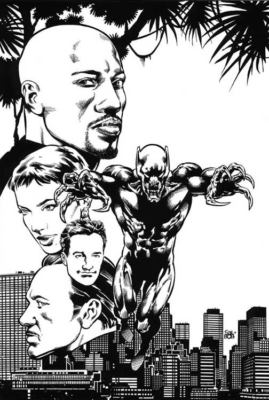 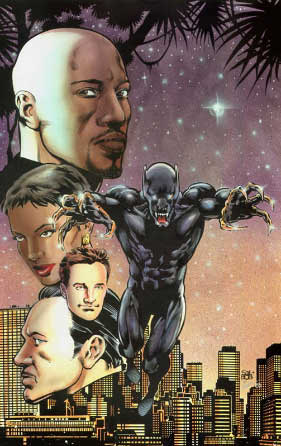