My 13th and last commission (for now) from a recent pile of them from Jeff, perhaps the most-prolific Namor art fan and collector out there, this one was my first experience inking another Brazilian artist, Elton Ramalho. The “Ed, Edd & Eddy” of Marvel Comics when it comes to names, this work depicts his cousin Namora (1st appearing in the Golden-age of comics at Timely/Marvel), and her daughter Namorita/Nita. Unfortunately, to further trim down Namor’s list of living relatives and loves, like Lady Dorma, Namora was also murdered by the lethal Llyra not long after her Bronze-age re-introduction. If I was Nita I’d be wearing body armor by now. But I digress. Jeff had me remove/manscape Namor’s drawn in body hair in this 11X17 commission which was completed in brush and marker by 2/17/04. 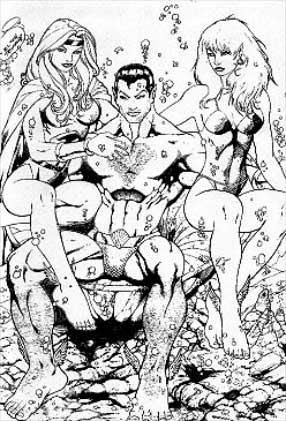 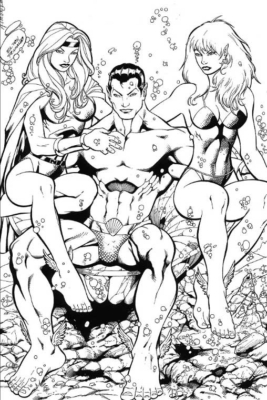