“Forgive the darkened pencil image (File 1) but Brett draws with a very hard pencil that isn’t easy to reproduce. I had the same problem, but worse, with the very next entry by him, Arabian Knight…both for client Damon Owens. These are my first inks over Brett who is one of the west coast-style or ‘Image-style’ artists so inking someone like him is a pleasant challenge but it’s also like thinking with another part of my brain. This kind of art is normally inked by a quill-adept inker who can ink in, as ink artist Al Milgrom labels it, the ‘Morse Code’ inking approach, with all of the ‘dots & dashes’. Besides the fact that I’ve not quite adapted to that approach, the board used for the commission bled with any quill stroke I attempted. I used some brush for the feathering but I used mostly marker and tried to simulate the fitting inking style without being obsessive about it. It almost killed me with the infinite straps and buckles but this Giant-Man commission (Bill Foster, formerly AKA Black Goliath, not Henry Pym) was completed on October 2, 2003. Tom Smith later colored it. 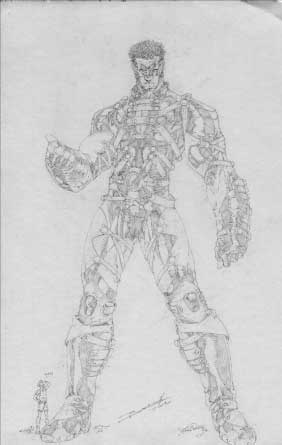 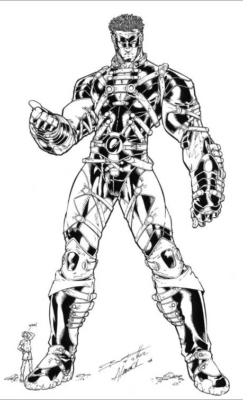