First time client Mike Bueche was one of only two that I agreed to do a pencils & inks, solo commission on a blank variant cover. Those who know me know that I rarely take on solo commissions because it takes me forever and the client often waits months to a year for completion. For Mike it took 5 months. He simply wanted a full figure Black Panther. While I did crop the feet, I did add a full suggested Wakandan background and props like the spear of Bashenga and the Wakandan national banner (designed by me for Sal to render in Black Panther#49, 2002). This is my 29th BP commission.

I inked it with my Raphael Kolinsky 8404 #2 brush, Pitt brush marker, Pitt S marker, micronmarkers, drybrush, white paint spatter and some white paint finger smudges. It took me about 3 days to work on. I completed it on 11/10/2016. 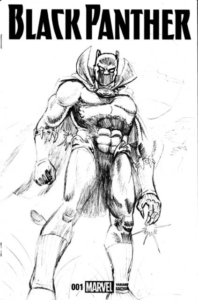 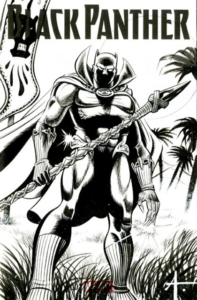